I was born in a negative environment. All I’ve been hearing throughout my life is how imperfect I was and how inadequate I was. No matter what I do, everything or anything just wasn’t ever enough. A few years after college, when I started living alone, I realized that I need to put some positivity in my life or else, I’d be doomed. I tried so hard thinking positively in spite of living most of my life in a toxic way.

Positivity is slowly entering my system as my goals are being achieved one by one. It was a very slow process but I’m on my way there. I had to shut off negativity when it started to crawl in again. Thinking positively has been a very difficult goal for me to achieve. In fact, I felt that I was already faking happiness because I know deep inside, I was still lonely. This has changed when I accepted the Lord. I’m still on that positivity & happiness journey but now, I know that I’m not alone.

Now, why am I sharing this? Today, I took a leave from work to attend the Happiness Boot Camp arranged by Cebuana Lhuillier Insurance Solutions. I didn’t wanna miss the chance to learn how to be happier. We are all a work in progress after all! 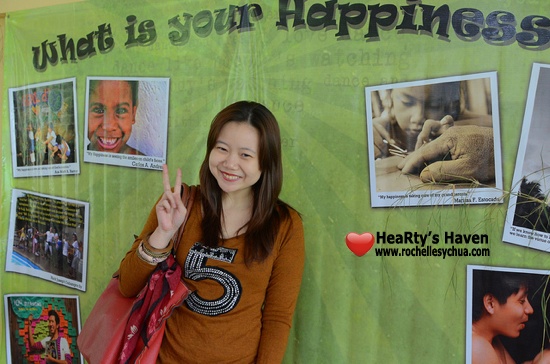 The Happiness Boot Camp was organized to also launch the 2012 Search for the Happiest Pinoy. The search seeks and recognizes the country’s most optimistic and passionate Filipinos who overcame difficulties and shown resilience in spite of life’s difficult challenges while keeping a big smile on their faces.

Here are some information about the search:

Where to submit nominations?
What are the criteria for judging?
How are the winners selected?
What are the prizes for the Happiest Pinoy?

So friends, if you know someone who fits the description then don’t hesitate to nominate them. Let’s make the happiest pinoy happier by recognizing their cheerful attitude, their passionate heart and their happy virus!

Me, on the other hand, enjoyed the Happiness Boot Camp. It was held at the Nurture Spa in which I got the impression that I’d be getting pampered and relaxed especially since I’d be getting my much-needed massage 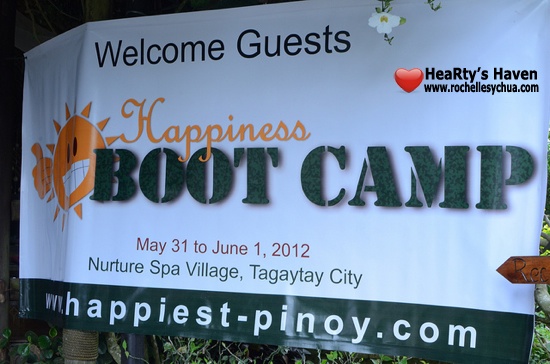 Well, it wasn’t only the massage and the relaxing ambiance that made my stay enjoyable but the valuable lessons I got from all the talks from the speakers. 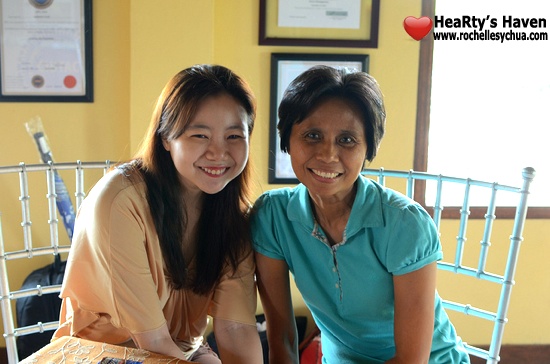 Nanay Nona was my roommate! It was a blessing that there were issues with logistics that I ended up in her room. I learned so much from her! She shared how being a vegetarian made her a happy Pinoy. I believed her, I do! However, I know that eating meat especially my comfort food helps me relieve stress. I guess, that eating my meaty comfort food isn’t good long term wise but I’ll have a hard time practicing what she taught us. It was a valuable lesson especially when she shared her personal experience.

Nanay Nona used to eat a lot of processed foods but that caused her illnesses. She became interested in studying about health in preparation for motherhood by reading tons of books and attending trainings on natural fertility management and natural healing. After a non-medicated birth experience, she exclusively breastfed her child and gave her only natural food. She became happier considering her illnesses didn’t come back anymore. She then became an advocate of indigenous vegetarianism, natural healing and natural parenting. She’s a hero and she’s indeed deserving to be one of the winners of the 2010 Happiest Pinoy Search. 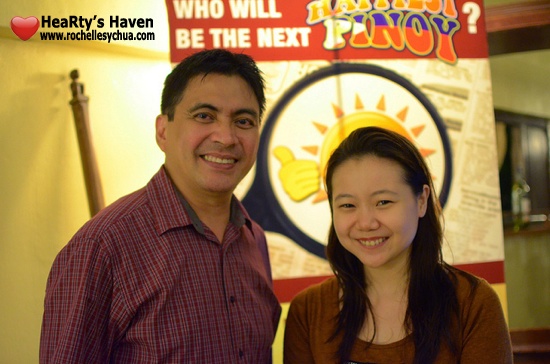 Being in the same room with Happiest Pinoy winner Winston Maximo was truly an honor! I was totally humbled after hearing his story. I couldn’t complain more about my life considering what Winston went through. He truly deserved to win the Happiest Pinoy search and I’m glad that he took the time in inspiring all the participants of the Happiness Boot Camp with his presence and story. Winston Maximo has a positive outlook in life and he’s such a strong person. If I’m in his shoes, I’m not sure if I can handle the same situation with that kind of strength and resilience.

Maxino was diagnosed with ankylosing spondylitis (causes swelling in a part of his spine and constant pain in his lower back). He gets by with pain killers and drug infusion to lessen the tenderness in his back. As a matter of fact, while he was speaking at the Happiness Boot Camp, he was in pain. In spite of that, he still had a big smile on his face. Truly admirable!

He’s a great speaker too! I learned so much from his speech and he was able to inject some jokes here and there. Winston Maxino said that he chose to be a winner in spite of the pains and struggles in life. He also mentioned that he was humble and happy to realize that he inspires people with his story.

One of the stories he mentioned was from his childhood and it stuck in my mind. When Maxino was in grade 4, he wanted to be a boy scout but was rejected by his scout master that declared that he didn’t meet the physical requirement for camping and other boy scout activities. Winston couldn’t accept a ‘no’ so he approached the head teacher but he was rejected too. Winston went home and plead for help from his father. His father wrote a letter to the school which successfully registered Winston Maxino a boy scout officially.

Winston fought hard and became outstanding boy scout of the year which partly paid for his high school tuition. Imagine Winton’s perseverance paved the way for his partial scholarship and service awards! His father must be very proud of him!

He is happy to have lived his dream and aspiration to be a boy scout. He refused to be defeated by his sickness and he worked very hard to improve his situation. He took failures as lessons in life. He went through moment of weakness and anger too but as Winston Maxino said, you can fall but you can also rise. He managed to pick himself up, lick his wounds and move forward.

Another story he shared that touched our hearts was the story of Winston’s 2nd daughter who was born with down syndrome (mongoloids). In fact, his daughter is like his father, you can see how she choose to be happy in spite of the sickness. She was all smiles when she was introduced to us. Happy people are really the little heroes of the world. I salute those people. It is really a choice.

My take away with Winston Maxino’s talk is that the Happiest Pinoy search is all about honoring and celebrating the Filipino resilience. Resilience is something that has a bad past but has bounced back and moved on with his own life. There’s a certain streak of stubborness that rebels against despair and helplessness. He never say die even if the world has turned its back on him. He surrounds himself with people who loves and cherishes him. He has faith that God will send him the relief. When good things come his way, he appreciates them and give thanks. These are blessings in life.

Money cannot buy happiness and resilience. We already have everything we need to be happy. Let us be infected with the happy virus and eagerly pass it on to other people.

There he ended his speech with ‘the happiest person wishes to be excused’. That was really funny, hahaha! He spoke only for 15 minutes but every word that came out of his mouth was full of wisdom. I feel honored to be one of the people who have listened to Winston Maxino. He indeed is
the Happiest Pinoy I know. 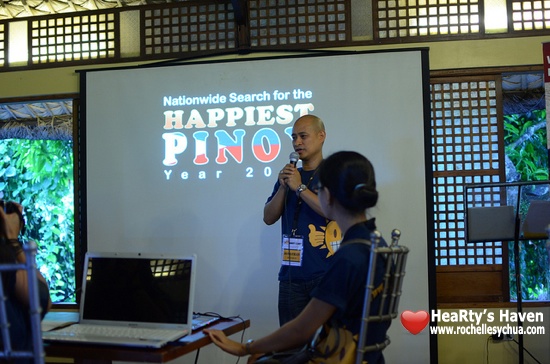 The Happiness Boot Camp wrapped up with Jonathan’s talk about Happiness.

Some things I learned is that Cebuana Lhuillier Insurance Solutions created the Happiest Pinoy Search to promote positive Filipino values of optimism, resilience and hope in these uncertain times. Apparently, Philippines is currently #13 in the happiest countries list by nation master. The 2012 Happiest Pinoy search winner will be crowned on September 25, 2012. I wonder who will it be this time. I was just so inspired by previous winner Winston Maxino and I’m sure that if we get to know the next one, we will be equally inspired. We have so many heroes in our country and I’m glad that they are being recognized with contests like this one.

Jonathan Batangan summarized the Happiness Journey with the ff.:

I’m reminded of how important it is for us to choose happiness. We are in control of our lives. I guess the next time I take the happiness index test, I will get a better score 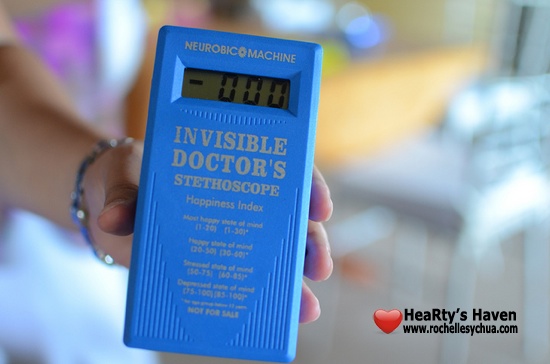 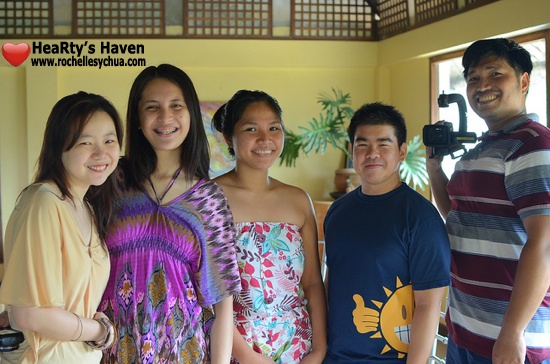 So there, that was how I spent my thursday and friday. I hope my narration inspired you as it had inspired me during the Happiness Boot Camp. If you know a Happiest Pinoy, do nominate them!

Cebuana Lhuillier Pawnshop has been the leading pawnshop chain in the Philippines with over 1,500 branches across the country—from Aparri to Tawi-Tawi. For 25 years now, Cebuana has been true to its slogan “Walang Kapantay Magpahalaga” through the incomparable services that the company offers to its customers- this includes — pawning, local and international remittance, insurance, bills payment, e-load, collection, and foreign exchange. Founded in 1987 by the current Philippine envoy to Portugal, Ambassador Philippe Jones Lhuillier, Cebuana Lhuillier is currently managed by its President and CEO, Jean Henri Lhuillier.